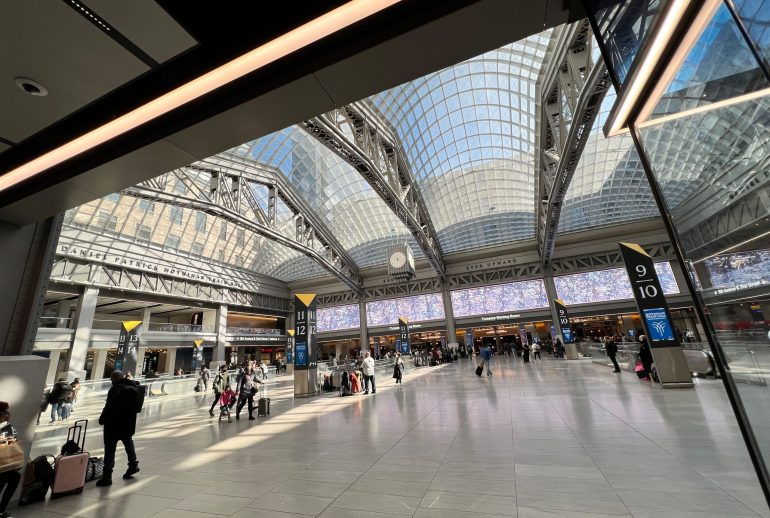 Always at the verge of being trapped by history, an architect working on the adaptive re-use of an historic building must constantly grapple with what is there, what used to be there and what should have been there. What is the remaining “historic fabric” and can it be saved? Are there significant features that were removed that could be accurately recreated based on historical records? Are there documented portions of the original design that were not built but could be now? The Secretary of Interior’s Standards for Rehabilitation provide detailed—and for Federal buildings—required guidelines. However, an architect must still make a myriad of decisions. Too often, adaptive re-use of an historic building can turn into a pastiche of historicism—a visual nod to history that is neither rooted in fact nor acknowledges the present. (This approach can even spill over into new work; thus, the late 1970s, early 1980s Post-Modern architectural movement.)

Transforming McKim Mead and White’s General Post Office (subsequently renamed the James A. Farley Building) was the opportunity to make up for the destruction of the original McKim Mead and White Pennsylvania Station—one of the greatest urban blunders in New York City history. The genesis and genius of the five design schemes beginning in 1993 was the conversion of the central mail sorting room that sat over the western portion of Amtrak’s railroad tracks into a grand, skylight lit space. Skylights lit the mail sorting room prior to being roofed over during World War II so this was not so farfetched. This new glass structure became the singular gesture to define what was now called the Moynihan Train Hall. As David Dunlap succinctly explains in his 2016 New York Times article, the schemes ranged from HOK’s immense parabolic glass and steel vault (“Farley 1”) to a later design that replaced the parabolic vault with a nine bay, wispy, glass and steel structure by HOK and James Carpenter Design Associates (“Farley 3”), to SOM’s design that utilized the original steel trusses to support enormous glass space frames (“Farley 5”) which itself was modified in the final built iteration. [1] 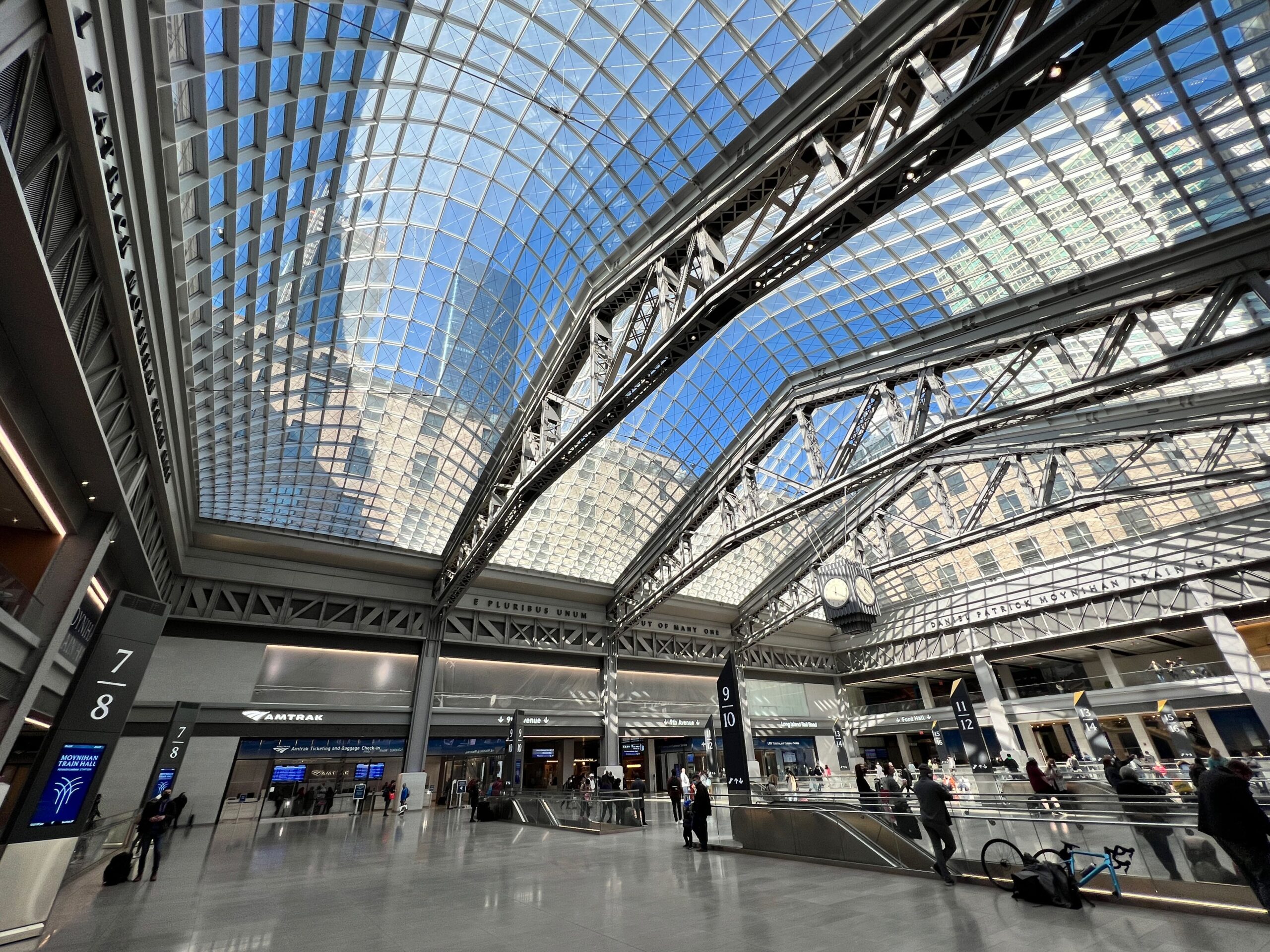 Common to all these schemes was the recognition that the contemporary should be distinct from the historic. Each design, uniquely, pushed the boundaries of what was possible at the time with steel and glass. There was no attempt to “bring back” the original Penn Station—to create or evoke what had never been there in the first place. Even beyond the monumental central space, the visitor would clearly recognize what was new and what was not. What the HOK and SOM schemes did bring back was the idea that a mass transportation hub is a civic virtue to be celebrated, not cast off into dreary, underground retail corridors and bullpen like waiting rooms.

Opened in 2021 and with the interiors generally now complete, a visitor to the Moynihan Train Hall will find the experience walking through the main Hall exhilarating and unmatched in the city by any other public space except perhaps Grand Central Terminal.  And even here, the differences are striking and noteworthy.

While Grand Central Terminal’s Main Concourse ceiling reaches 120’ towards a dark, vaulted, painted night sky, the Hall’s four sinuous, undulating glass and steel webs topping 92’ lead the visitor’s eye up and out into the sky. Closed versus open, very different experiences of space. In Grand Central, the immensity and grandeur of the Main Concourse, activated by the constant stream of people crossing through the space in all directions on their way to offices, trains, subways or the street defines the urban environment. The footprint of the Train Hall is similar in size with less frenetic activity. Visually, there is no ceiling.  It is the partial views of surrounding high-rises and the upper stories of the Farley building that really connect the visitor directly to the city. No matter that you may be new to New York City, you get an immediate sense that you are here.

The Train Hall can be entered from several different directions. Recent observation saw most people entering from the two street level entrances on 8th Avenue, or from the tunnel at the northeast corner of the building that leads from the subway and the underground Penn Station retail concourse. Street level entrances mid-block from 31st and 33rd streets bring the visitor into a wide corridor enclosed by a 200’ long, billowing glass and metal space frame.

Escalators and stairs take the visitor down to the main level. The design of the exterior entrances to the Hall were a missed opportunity (see my Part I appraisal) and the tunnel entrance is hardly awe-inspiring. However, reaching the main level, the visitor’s first glimpse of the central Hall is stunning.

Three, open web, double steel trusses painted dark grey span the space from east to west. Original to the building, each is irregularly punctuated by rivets and riveted steel plates. Patches of texture, their seemingly random placement is in stark contrast to the meticulously engineered glass and steel webs that the trusses support. 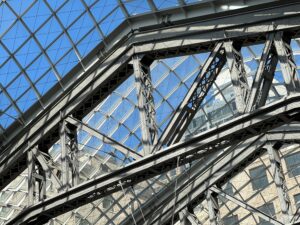 The upper three stories of the Farley building frame the Hall on the north, south and east sides—flat, uniform, beige colored brick facades with rows of punched windows. High-rise buildings can be seen beyond and to the west. This juxtaposition of old and new, micro and macro, and the constantly changing view as the visitor traverses the Hall are what animates the space. 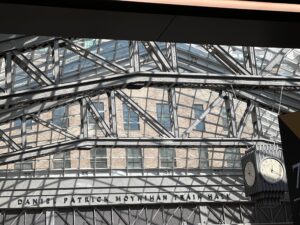 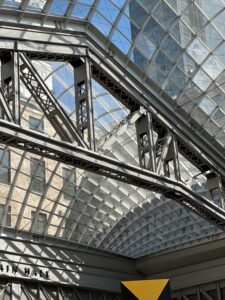 Subtly changing, colored lights play off the trusses and the perimeter of the Hall beginning in early evening. While the contrast to the darkening sky is interesting, they don’t add anything qualitatively to the visitor’s experience.

Centered within the Train Hall is a four-sided clock hung from the middle truss, the only element seemingly designed to bridge the gap between historic and contemporary.  It is vaguely Art Deco, ribbed cubes matching the trusses’ color with a cream colored clock face telling time with sans serif numerals. Perhaps this is a gesture towards Grand Central’s famous Information Booth clock and the old saying to “meet me under the clock.”

Outside of the main Train Hall space, the design vocabulary is starkly contemporary. Light colored, metallic looking ceiling planes holding light fixtures, security cameras and mechanical grilles line the large corridors leading to and from the Hall. They change dimensionally and in direction, and are interrupted at regular intervals by black voids also varying dimensionally depending on the size of the corridor. These create a sense of scale in the large passageways. Also adding an element of scale is the play of light and shadow created by the varied lighting types and lighting levels. LED directional signage is suspended at strategic locations.

There is a crispness and attention to detailing here in the way that materials are joined. Connections are invisible to the eye. The material palette is limited to primarily stone and metal, all in tones of silver, grey and cream, with darker greys defining the main hall. Undermounted, continuous white LED lighting outline the pencil thin, elegant stainless steel stair railings and provide another measure of safety. 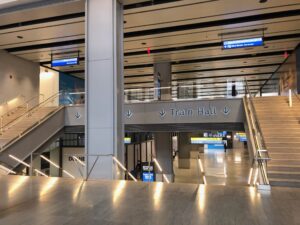 Nothing is extraneous; the one example of an applied wainscotting this writer saw seemed out of character and an anomaly. The only decorative aspects of the Moynihan Train Hall are the public artwork (better discussed in other publications than I can do here) and the immense LED graphic that comprises the 2nd floor east wall of the main space. It does double duty as massive advertising and abstract digital art. It’s visible from almost any vantage point in the Train Hall and is a good way to visually orient oneself in the complex.

The lack of public seating in the main Hall itself is a disappointment and a major omission. Small enclosed, waiting areas for ticketed Amtrak and Long Island Railroad passengers are clearly insufficient, especially on peak travel days. 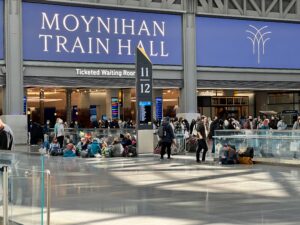 While this decision may have been made out of concern that public seating adjacent to the gates would be monopolized by homeless people[2], other train stations such as Philadelphia’s 30th Street Station have been able to successfully integrate open seating.

The 28 years that it took to design and build the Moynihan Train Hall is a shameful example of the development process at its most dysfunctional. That New York State Governor Hochul has decided to largely piggyback on former Governor Cuomo’s redevelopment plan for the rest of Penn Station is disturbing.[3]While it is not without its flaws, the Moynihan Train Hall is a superlative example of adaptive re-use and urban design not seen in New York City in a long time. Let us hope that it is not the last time.

All photographs by the author.

is a New York City based architect.